€15 Dracula Coin Rises from the Vaults of the Central Bank 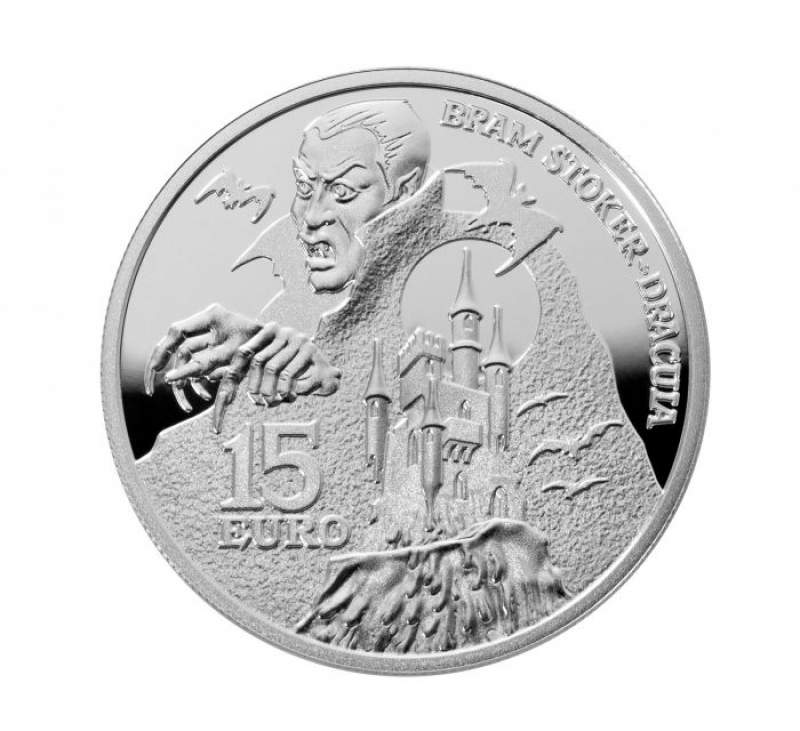 Bram Stoker was born in Clontarf, Dublin in 1847 and his interest in story telling likely began in childhood. Stoker was a sickly child, mostly bed-ridden and his mother entertained him with stories and legends from Sligo, which included supernatural tales and accounts of death and disease.

Stoker published his novel Dracula in May 1897, but despite positive reviews, it was not an immediate best seller. It wasn’t until the 1931 American movie starring Bela Lugosi that the popularity of the book began to grow, and it has never been out of print since.

To date, more than 1,000 novels and 200 films have been made about the vampire Count Dracula, which makes him the literary character most-often portrayed in film history.

Glasnevin Cemetery provided an appropriate backdrop for the official unveiling, where Central Bank Deputy Governor Sharon Donnery presented a commemorative coin to Minister for Finance and Public Expenditure and Reform Paschal Donohoe TD. Coin Designer David Rooney was also presented with a coin at the event along with Stoker family members.

Deputy Governor Sharon Donnery said: “The Central Bank is delighted to be commemorating a renowned Irish author such as Bram Stoker with this €15 silver coin. Bram Stoker created one of the most iconic characters in all of literature and film, and it is only fitting that we should honour him with this coin, which depicts the figure of Dracula looming behind his moonlit castle in Transylvania.”

Minister for Finance and Public Expenditure and Reform, Paschal Donohoe TD, said: ‘As one of the most recognised literary characters in the world, Bram Stoker’s Dracula has terrified and delighted audiences in equal measure for generations. It is fitting, especially at this time of the year, as we approach Halloween that Bram and Dracula are commemorated in this way. I am delighted to be here to mark this event with members of the Stoker family and would like to thank the Central Bank of Ireland for paying tribute to one of Ireland’s most revered authors in this way’.

Dacre Stoker, great grand-nephew of Bram Stoker and co-author of the recently publish prequel ‘Dracul’, said: “On behalf of the Stoker family, it is wonderful to see Bram commemorated in the city of his birth in such a magnificent way. I hope that his coin sells as well as his famous novel Dracula has around the world.”

The €15 Silver Proof Bram Stoker Dracula coin is on sale today for €60. It has an issue limit of 3,000 and can be purchased on www.collectorcoins.ie. The most recent collector coin, launched to commemorate Rory Gallagher, sold out in less than 48 hours.