Dublin commuters can now cross the Liffey in a jiffy 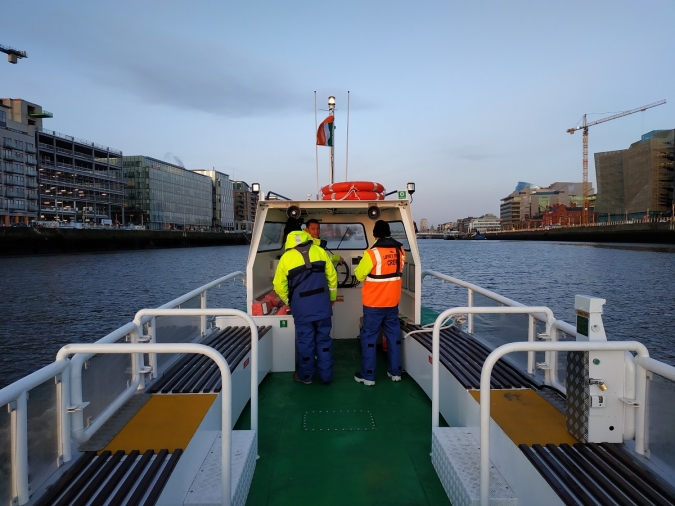 The maiden voyage of the Liffey Ferry Number 11 / Picture: Liffey

This morning, after a 35 year absence, the Liffey Ferry Number 11 has entered into service and will save a lot of time to those who want to cross the Liffey by an intermediate point between the Samuel Beckett and the Tom Clarke bridges, which are separated by a distance of 900 metres. Given the urban growth of the area, both in housing and commercial, the ferry should surely attract a large customer base, particularly during the rush hour.

↓ PHOTO GALLERY at the bottom ↓

The ferry is a joint initiative between the Dublin Port Company and the City Council and operates from Monday to Friday from seven in the morning to seven in the evening, weather permitting; each trip costs two euros, which can be paid in cash or with the Leap Card, the multi transport card valid in the main cities of the Republic.

The fares collected will be used to finance a maritime training program for young people from the area that will be managed by the Irish Nautical Trust. The program will have an initial duration of six months and will involve groups of between 8 and 10 apprentices, who will learn in a very practical manner all the arts related to navigation.

The boat has capacity for 18 passengers and the routes draw a triangular shape, with two boarding points on the north bank and one on the south bank: from the 3Arena concert hall (north bank), to Sir John Rogerson's Quay (south) and then back to the north, right next to the MV Cill Airne, where there is a bar & restaurant. And viceversa: Cill Airne - Sir John Rogerson's Quay - 3Arena.

Therefore, as of today, the Liffey can be crossed again in a jiffy, which is the time unit that the light takes to travel a centimetre, although the phrase is not entirely true because the ferry number 11 takes about three minutes to link the two shores. Anyway, it will surely result in a big time saving for those who now have to walk a substantial distance to reach the Tom Clarke or the Samuel Beckett bridges.

The 35 year absence dates back to 1984, when the entry into service of the East Link Bridge, the last bridge that crosses the Liffey before the river reaches the sea at Dublin Bay and that three years ago was renamed as Tom Clarke Bridge, resulted in the disappearance of the ferry, which had the dockers from Ringsend and Irishtown as its main customers, thus being nicknamed the “dockers taxi” as it brought them to the docklands, located on the north bank.

The ferry from that specific section of the Liffey had the number eleven and had started service in 1665 thanks to a royal chart issued by King Charles II of England. All over the years it probed a vital resource for the economy of many dockers families because until 1984 the last bridge crossing the Liffey was the Talbot Memorial, built in 1978 near the Custom House and which resulted in a 5 kilometres long journey.