An Post deliveries in Dublin, zero emission by year end 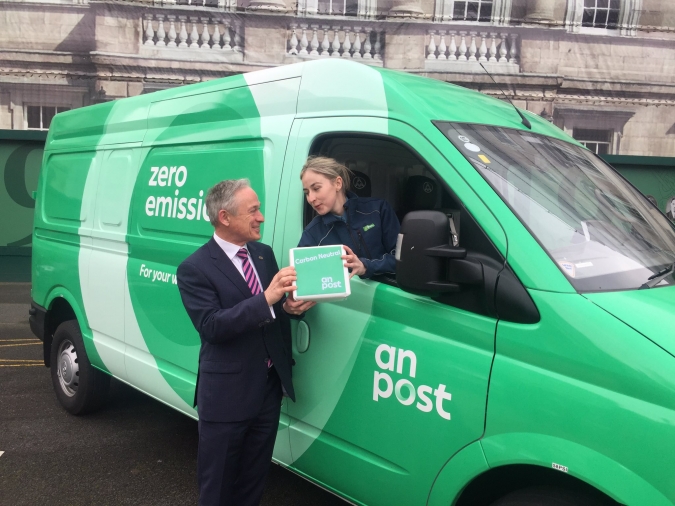 The Minister for Communications, Climate Action and Environment, Richard Bruton T.D. today (20th of February 2019) announced that all An Post deliveries ‘between the canals’ will be zero emission by the end of this year – i.e. between the Royal and Grand canals, as part of the company’s ‘Post Eco’ plan to eliminate carbon emissions by 2050.

- A number of trials – including public charging points for electric vehicles outside post offices as well as installing solar panels on its buildings and sharing the financial benefits with local community-based environmental initiatives.

- Eco-Driving training for all drivers to ensure best practise driving in all vehicles and for all road and weather conditions.

Altogether, initiatives being introduced in 2019 will save 1,000 tonnes of carbon annually.

“We must step up Ireland’s response to climate disruption. It is vital that every aspect of our society seek ways to reduce their carbon impact and the public service and our semi-state bodies must be the first to show that it takes policies for sustainability seriously, if we are to persuade the rest of society to make the step changes which we need to make.”

“Today’s announcement shows that An Post is taking the lead and recognising the urgency of taking action in adapting to the changes that are needed. By placing sustainability at the core of their business strategy, they are leading by example.”

“As An Post moves from the old world of mail to the new world of e-commerce, sustainability has to be the guiding principle for the business. An Post is transforming for generations to come: as a major employer with a huge fleet footprint, this demands responsible climate action with this commitment to carbon-free delivery.”

Minster Bruton and Mr. David Redmond launched the Plan in the Houses of the Oireachtas today. For their part, the Houses of the Oireachtas are fully committed to its own sustainability initiatives, and with this in mind two charging points have already been installed to date with further points to be rolled out in the very near future. These measures mean that An Post electric delivery vans can charge up at Leinster House.