The Catalan version of Dubliners lands at Sweny's 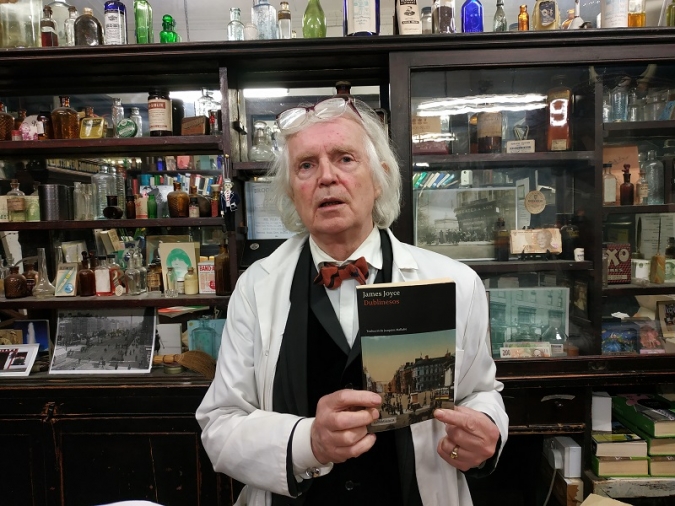 The masterpiece Ulysses describes Dublin in such a detail that James Joyce once said that if one day the city was to be rebuilt from scratch the work could be easily done by just having a look into his novel. Now, more than one hundred years after that 16th of June 1904, known to the Joycians of the world as Bloomsday in honour of the main character of the book, Leopold Bloom, the Irish capital has changed a lot, but nevertheless, there are some commercial establishments like shops, pubs or hotels which appear on Bloom’s itinerary that are still in business today.

↓ PHOTO GALLERY at the bottom ↓

One of the best examples of this connection between today’s Dublin and Ulysses is the former Sweny's pharmacy, located on Lincoln Place (Dublin 2). In chapter five, Bloom enters the old shop and buys a bar of lemon soap, carrying it in his pocket like a talisman. The business opened in 1847 as a GP’s consulting room, adding a pharmacy six years later, and remained open as such until 2009, when the owner retired.

In any case, despite the fact that it ceased trading as a pharmacy, the indoors and outdoors of the place kept many of the original elements and by combining them with books it became a site run by volunteers, obviously big fans of James Joyce, and where daily readings of his main books are held, some in languages other than English. Visitors are usually tourists interested in Joyce’s work, but there are also Dubliners who like to dive into the Joycean universe.

However, being in a very central location of ​​the city and with an unstoppable upward spiral of commercial rents, volunteers are struggling to keep the place afloat as the landlord raised the monthly rent to 1,500 euros last June. Another expense is the council rates, because despite being a charity the local authority does not make any distinction when it comes to collecting rates as it is one of its main sources of income.

Therefore, due to the fact that the income from private donations, the sale of second-hand books and lemon soap bars at five euros is not enough, now, following the new financing trend of crowdfunding, the Joycean former chemist charity has opened an account with Patreon and is looking for patrons worldwide that could help keeping Sweny's open by making a small monthly contribution, which comes with a reward.

And a few days ago, Diari Liffey went to visit Sweny’s and handed over to PJ Murphy, the most known face of all the volunteers due to his extraordinary Joycean appearance, the Catalan version translated by Joaquim Mallafrè (La Butxaca Editorial, from Grup 62) of another masterpiece from the most universal Irish writer, Dubliners, a work published in 1914 which explains the life of the Irish middle class in the city of Dublin and surroundings during the first years of the twentieth century through fifteen short stories. The last one, called The Dead and containing 15,952 words, was brought to the big screen in 1987 by director John Huston.