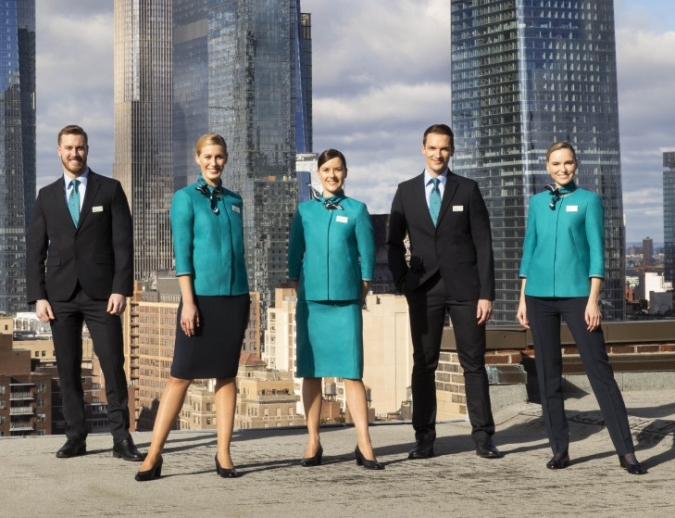 Aer Lingus has today revealed its new look uniform which will be worn by over 4,000 cabin and ground crew around the world from February 10th. Created by Irish fashion designer Louise Kennedy, the new look reflects Aer Lingus’ status as a modern international airline with a proud Irish heritage and is the final stage in the airline’s brand refresh.

Guests flying with Aer Lingus in the coming months can expect to still see iconic green, now a new ‘Kenmare Green’, as well as a greater inclusion of navy, entitled ‘Midnight’, throughout. In all, 25 garments have been designed giving crew and ground staff a greater variety of styles from which to choose. Notable changes to the uniform include the addition of trouser and dress options, new jacket and coat designs for male crew, and easy-care shirts and blouses for the convenience of all crew. For added comfort, garment materials have a level of stretch and are designed to fit and flatter all body shapes and sizes.

The new look uniform is the culmination of a two-year project between Aer Lingus and Louise Kennedy involving extensive staff engagement as well as external research in Dublin, London, New York and Paris.

Speaking at the announcement, Aer Lingus CEO, Sean Doyle said: “Our guests’ main engagement with our brand is with our 4,000-strong workforce of ground staff and cabin crew, therefore our uniform is an embodiment of who we are as an airline. As with our logo and livery, our new uniform needs to reflect the modern, international airline that Aer Lingus is today; while also ensuring that our unique identity is retained and our values as an airline are reflected. Louise Kennedy has achieved that in the uniform that we are unveiling today, and it is the final step in a process that has seen over 500 points rebranded over the last 12 months."

Irish fashion designer Louise Kennedy said: “We were honoured to be chosen to design the new Aer Lingus uniform. The brief from the airline was very clear and we were confident we could deliver a modern and stylish capsule collection which would endure for several years. The results reflect extensive engagement and inputs from the ground and cabin crew members. Importantly, over the past two years, we had constant support from Aer Lingus to remain true to our designs that allowed for more uniform options and the use of innovative fabrics.”

Dara McMahon, Director of Marketing and Digital Experience at Aer Lingus, said: “The redesign of the Aer Lingus uniform has been a carefully considered and highly researched process. Our cabin and ground crew told us clearly that comfort, practicality, versatility and flexibility needed to be key factors in the redesign. For guests, uniformed crew are often the first physical contact they have with the airline and so they wanted to see a design that was still distinctly ‘Aer Lingus’. We are thrilled with the results and feedback to date and are confident that with Louise Kennedy, we have achieved a classic design that will represent Aer Lingus well for many years to come.”

To ensure the comfort of all uniformed crew, all garments have been made with the highest quality materials to ensure their longevity and durability. All materials used have been sourced and manufactured in an ethically responsible manner to minimise environmental impact.

In that time, Aer Lingus, Ireland’s only 4 Star airline, has embarked on a significant journey, now flying 16 direct routes to North America, operating over 70 European routes and carrying over 12 million guests each year.